Thiacloprid (THI) is a nicotinic receptor agonist widely used as pesticide in Algeria, however it is susceptible to accumulate in various fruits and vegetables and pouring downstream into food plates and contributes to the development of neurodegenerative diseases. Conversely, several natural compounds are provided with cytoprotective potential and, therefore, are able to act against the harmful effects of toxicants such as pesticides. This study focused on striatum (str) and hippocampus (hipp) mitochondrial toxicity assessment, evaluation of behavioral function and intrinsic apoptosis pathway in rats exposed to THI at low-dose (0.020 mg/kg) for 3 months. In addition, this study examined neuroprotective potential of bitter apricot kernel extract when administered concomitantly with THI at the dose of 50 mg/kg. In current study, assessment of mitochondrial permeability transition pore (mPTP) and swelling, evaluation of mitochondrial redox status, cholinergic function (Ach E) and apoptosis markers (Caspase 9 and 3, Bax and Bcl2, Cytochrome c and cytosolic calcium) were performed in both brain areas, besides behavioral and histopathological examination. The results showed an increase of lipid peroxidation in both of str and hipp with a values of 1,14 ± 0,04 nmol/mg of proteins (pr) and 1,58 ± 0,09 nmol/mg pr.  respectively  and a significant decrease in GSH (0,09 ± 0,01 mmol/mg pr. in hipp and 0,08±0,01 mmol/mg pr. in  str), the results also showed a change in the activity of antioxidants enzymes  SOD (16,37±1,09 UI/mg pr. in hipp14,54±1,46 UI/mg pr. in str) , CAT (0,010±0,01 UI/mg pr. in hipp and 0,005±0,004 UI/mg pr. in str), GPx (0,01± 0,001 nmol/mg pr. in both hipp and str) and GST (23,73±1,68 UI/mg pr. in hipp and 17,56± 1,04 UI/mg pr. in str), as well as an abrupt increase in mPTP opening with a value of  (0,057±0,005 in str and 0,054±0,005 in hipp) , which leaded to mitochondrial swelling where the level o mitochondrial swelling was (0,016±0,002 in str and 0,106±0,003 in hipp), the swelling was associated also with a high  releasing of Cyt-c with a values of (4,48 ± 1,26 µg/ml in str and 5,32 ± 1,08 µg/ml in hipp ) and Ca++( 2,26±0,06 mmol/l in str and 2,32±0,07 mmol/l in hipp) into the cytosol, the results also showed a significant decreasing of Bcl2 (16,4 ± 1,86 ng/mg pr in str and 14,8± 0,82 ng/mg pr in hipp), in the other hand the rates of caspase-9 were (278±14 mAbs/mg pr.) in str and 212 ±24 mAbs/mg pr. in hipp), caspase3 (184± 16mAbs/mg pr.) in str and 250 ±14mAbs/mg pr. in hipp), and BAX (0,926 ng/mg pr in str and 1,189 ng/mg pr in hipp) were increased.  The results of this study revealed also a decrease of memorization processes and learning abilities, at the same time a decrease in Ach E activity (14,02± 0,78 nmol/min/mg pr. in str and 22,35± 1,77 nmol/min/mg pr. in hipp) was recorded. Inversely, bitter apricot kernels extract showed higher cytoprotective potential against THI neurotoxicity, since mitochondrial redox homeostasis and membrane integrity were recovered, cognitive impairment and brain tissue damage were also prevented. In conclusion, THI induced mitochondrial disorders, triggered apoptosis signaling pathway and impaired cognitive functions which were prevented by bitter apricot kernels extract when associated with this pesticide. 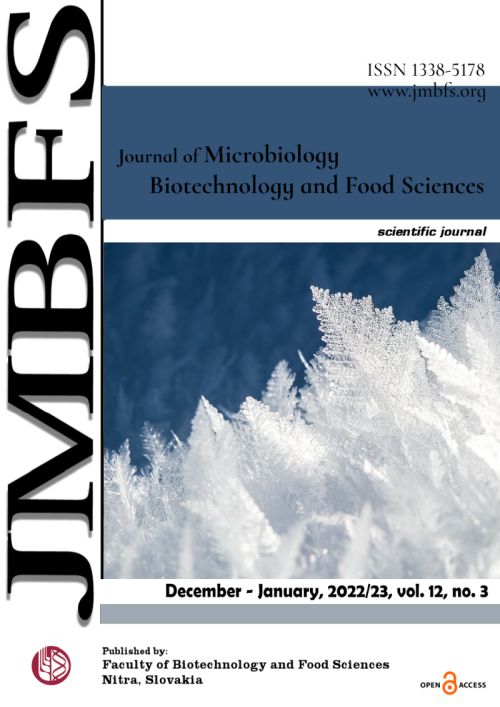 This work is licensed under a Creative Commons Attribution 4.0 International License.

All papers published in the Journal of Microbiology, Biotechnology and Food SciencesÂ  are published under a CC-BY licence (CC-BY 4.0). Published materials can be shared (copy and redistribute the material in any medium or format) and adapted (remix, transform, and build upon the material for any purpose, even commercially) with specifying the author(s).

Most read articles by the same author(s)